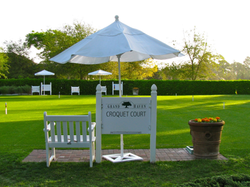 IT’S ALL NEW. The First Grand Haven Croquet Club Invitational Tournament was held on the new croquet lawn at Grand Haven, Palm Coast, Florida on March 29 – April 1, 2006 under ideal Florida weather conditions. Sponsored by Charles Schwab & Co. Inc, the Croquet Club Invitational Committee came up with a pleasant mix of croquet and social events to keep the most discriminating player pleased. Under the direction of Cassandra Gaisor, Tournament Manager, the “Three Musketeers” aka the Social Committee (Nan Stillman, Sharon Ragsdale, and Pam Sellars) did an outstanding job of insuring that off court activities went smoothly and on time. Fred Jones, as Tournament Director, controlled the on-court activities.

A great opening party drew everyone to the clubhouse for two hours of food and refreshments, and the next morning began three days of block play in three flights, leading to the top three contenders in each flight playing Saturday for the trophies.

Due to limitations of courts available, the solution was to invite handicaps from 4.5 to 12, which included the majority of the local players who wished to compete, as well as guest players from Hammock Dunes, Fleet Landing and The Villages, that would mix in well with the locals. There were several from the Grand Haven Croquet Club who were entering their first tournament, and from general comments, their experience was an upbeat situation.

Sunday saw the final nine, three from each flight play for their respective flight titles.

George Betz, a relatively new player for Grand Haven was undefeated except for a loss to Cassandra Gaisor, going into the finals.  Cassandra was undefeated except for a loss to Pat Williams, so all three of the top players had the same win-loss record going into Saturdays final games. Pat Williams played a strong game against Cassandra, defeating her 20 to 16 and earning the right to challenge George Betz for the championship in First flight. Playing fast, and with a unique style, but with great shooting accuracy, he managed to overcome the better strategy shown by Pat. Final score 19 to 9. Second flight saw Earl Polite ease by Bo Bohannon and then Charlie Greer to take the trophy 17-16. Third flight had Dorothy Williams with five block wins; defeat Sharon Ragsdale 19-11, before losing in the finals 12-10 to Nan Stillman, of Grand Haven, playing in her first tournament.

Greg Kopp and Lisa Garcia, both representing the sponsor, Charles Schwab, attended the functions, and became interested sideline attendees, so much so that they have asked to be included in the next group of beginners at the club.