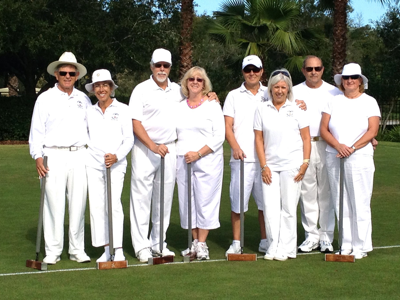 The First Grand Haven Rookie Playoff was deemed a complete success with 8 players competing for the title "Rookie of the Year".  All 8 players were part of the Spring membership drive and have been regulars in the Monday afternoon Shot-Making Clinic.  It was time to give them a taste of tournament play and push them out of the nest.

The first game lineup consisted of Stephanie Leroux & Tony Dos Santos, Bob Carlsen & Ivonne Wetjens, Janet Carlsen & Ton Wetjens, Linda Dos Santos & Roger Leroux.  In the first round, the games where very close with the winners margin between 1 and 4 wickets.  On the South Court, Tony won against Stephanie with several double and triple wicket runs and advanced on to play in the second round. Roger, playing on the North Court, defeated Linda with some accurate shotmaking to advance. Ivonne and Bob were tied at the end of the game to force another round of last ball. Ivonne made her wicket on her last shot, advancing to play in the second round. 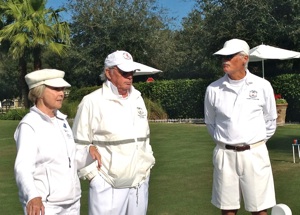 After lunch, play was resumed with round two and a match between Tony and Ton. A hard fought game with Tony again running several wickets in the end to win. On the North Court, Roger started off behind but played consistent croquet to overtake Ivonne to win and advance to the Playoffs. 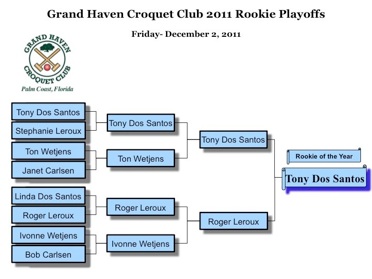 "There was a great feeling of accomplishment by all the coaches who nurtured the fledglings along.  Fun and sportsmanship was the name of the game.  It won't be long, and we may be facing one of them head to head in tournament play.

Special thanks to my wife, Diana, for pulling together a wonderful celebration spread to cap off the days activities.  Everyone enjoyed the Wine & Food, mingling with new friendships and are looking forward to a repeat event next year".