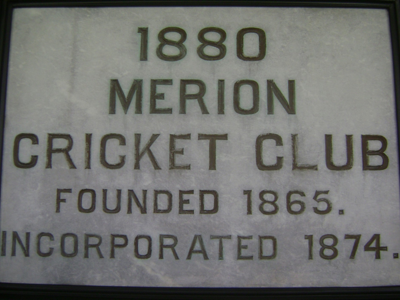 The Merion Cricket Club is full of history dating back to 1865.  The current clubhouse is its sixth, with two devastating fires destroying the building in January of 1896, then again just after it was rebuilt in September 1996.

The first cricket match was held in 1866.  The first tennis match was held in 1881, and the first golf course was laid out in 1896.  On the club grounds there are indoor and outdoor tennis courts, paddle tennis courts, squash courts, a bowling alley, dining facilities and a ball room.  The club has both croquet and cricket events...24 courts in total, making for a “Grand Lawn”.

The weather for this Tournament Event was chilly/cold, but the hospitality, food, and social activities were warm & friendly.  There were three flights; Championship, First and Second that had 3 devisions each; A, B, and C.  Four matches were required each day just to accommodate play for the  66+ players.  They used 16 courts to accomplish this.

The Grand Haven players had a good time.

Jim Pagano played somewhat sporadic, but managed a few positive tracking points and walked away with a silver platter for placing in the 1st Flight Doubles.

Joe Zilligen played well and returned with positive tracking points for his play in Singles and won the 1st Flight Doubles.