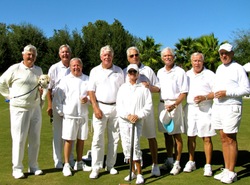 You couldn’t ask for better weather, greater food, or more exciting play!  The Grand Haven Croquet Club Championships for 2010 concluded with everyone having a wonderful time.  In the 1st flight, after some worrisome games in round robin play, last years’ Club Champion did what all Champions do; Chic Carpino took his game to the next higher level making a clean sweep during finals play.  In 2nd flight Charlie Greer went undefeated to claim that flights’ title.  3rd flight was played for the first time, and the players involved proved just how great our club is!  Peter Stirrup climbed from 3rd to 1st to complete his sweep.  A Special thanks goes out to those who supported this event thru their participation, helping Yvonne with the food or just by supporting the players by watching the matches and keeping board.

1st Flight - Eight players, only one winner, on any given day any one of the eight could win.  True as that statement is, and as evidenced at the end of four days of close and very competitive matches, Jim Pagano was first, followed by Carol Burns and last years’ champion Chick Carpino trailing in third.  But Chick was not to be denied, he went about the business of winning, taking Saturday’s Championship playoffs and repeating for the second year as the Grand Haven Croquet Club Champion for 2010.

2nd Flight - Charlie Greer took this flight undefeated but not uncontested, numerous times he was in trouble, but each time he too picked his game up to complete his sweep.  The competitors in this flight were not all seasoned players but managed to keep the competition at a high level.  Of special note, Joe Zilligen placing second compiled sufficient points to lower his handicap from 10 to 9, no small feat in this bracket!

3rd Flight - This is where the Grand Haven Croquet Club can be proud!  On its’ first time having a 3rd flight, the competition was well played, very competitive, and most of all fun!  Peter Stirrup came all the way from third to first in the last day of competition but it was not easy.  The rest of the field were all first time competitors in match play, each and every one of them played well and conducted themselves like seasoned players.

As the Tournament Director for this event, I can say it was a great experience for me as well, the Grand Haven Croquet Club is growing by leaps and bounds, play is very competitive but sportsmanship was in abundance, everyone jumped in to help, board keeping, food prep, setup and cleanup!  Next event?  Bigger, Better! 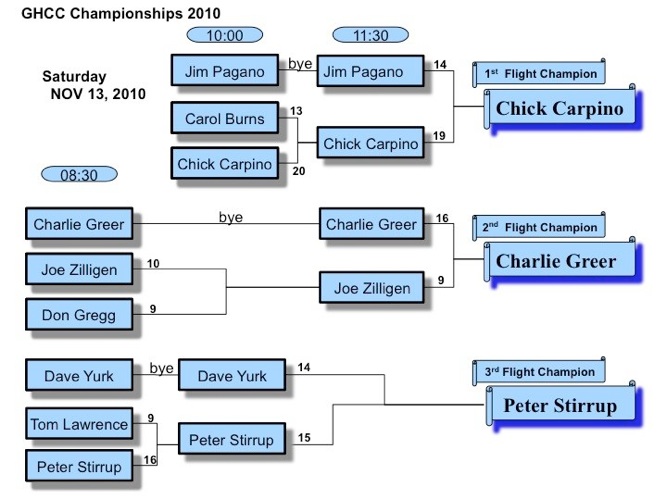