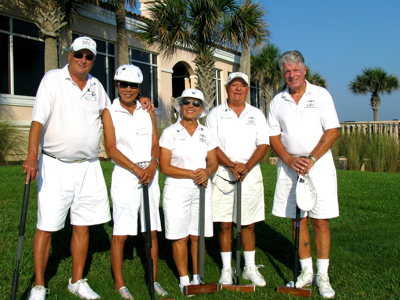 The Dorthy Fosse 2011 Invitational was held April 28-May 1, 2011 under sunny blue skies at the Hammock Dunes Club in Palm Coast, FL. The Grand Haven Croquet Club was well represented at this USCA sanctioned event with 9 players playing in 3 Flights.  Players included: Jim, Mijai, Antonia, Vincent, Chick, Cassandra, Charles, Tom, and Joe.
The results of the tournament are in - GHCC Trophy Winners! 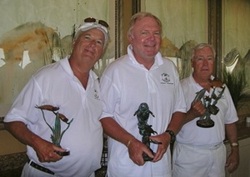 Results of the Dorthy Fosse Invitational Tournament are now official and two of our trophy winning players saw their handicaps tumble.

Congratulations to Tom & Joe!!!
The setting was outstanding, the weather was fine, the players were gracious, the food was superb, and the Eleventh Annual Dorthy Fosse Invitational played April 28th to May 1st at Hammock Dunes, Palm Coast, Florida was a huge success.

The grass on both courts was perfectly green and smooth, and the competition was keen. The courts are situated just outside the clubhouse, between the club and the Atlantic Ocean; a nice, but sometimes strong, ocean breeze kept everyone cool.

The two additional courts that were used became available through the generosity of the golf course superintendent utilizing an unused practice tee area on the driving range at the Creek Course. The generosity and co-operation of the golf course personnel was deeply appreciated. This is the fourth year that these lawns have been available. The golf personnel maintain them to croquet quality. First, second, and third flights each spent one day on the Creek courts, and the remainder of the time at the Dunes courts.

With players from Virginia, North and South Carolina, Georgia, and Florida, the total of thirty-two made for near- perfect flights of eight players each.

Following a superb Wednesday evening opening party at the Main Club, consisting of cocktails and heavy hors d’oeuvres, play began Thursday morning in earnest. Unique at this club, at least in my experience, was the assignment of deadness board keepers, for each board for every game during the tournament. All were club members and croquet players, not playing in the tournament. What a wonderful way to learn the game. Also the committee serving ice-cold bottled water both to the players and the board keepers throughout the tournament was a unique experience. Everyone involved appreciated both.

Championship flight played on the south full size court. The flight was led by Ted Knopf with a handicap of –1.5, and topped by Bill Grimsdale with a handicap of 1.5. Block play was the order of the day Thursday and Friday with a double elimination ladder on Saturday and Sunday for all flights.

John Curington was first out of the block, followed closely by Jim Hall; both had 4 wins out of 6 games, with Ted Knopf third. Curington went undefeated until the semi-finals, losing to Ted Knopf. Curington then defeated Jim Hall in the loser ladder, to emerge to meet Ted again in the finals. With the game going to last turn, Ted tied it up with all clips on 2 back. Ted then set a break for partner with partner and spent ball in the #4 corner, albeit out on the court by about 5 feet, leaving his ball about 10 feet north of 2 back.  Curington on the south boundary elected to shoot for his partner ball in the fourth corner area. A hit in gave him the break, but he elected to make 2 back, and then successfully destroy the field. Final score 15-14 for Curington, with Knopf finishing second.

First flight had the top seed take first in the block then to the ladder on Saturday. The upper half of the ladder was dominated by Keith Nelon straight through to the finals.

Bob Newburn, seeded 6th from the block, wound his way through the loser ladder, winning four games to meet Keith Nelon in the finals. It was a seesaw match with both players playing well and keeping the by-standers interested in the play. At the end experience ruled the day, and Keith wrapped up the game at 20 to 17.

Second flight saw Don Lancto, who has greatly improved in the last couple of years win 5 of 6 games in the block to the #1 seed in the ladder, closely followed by Charlie Greer, Joe Zilligen, Hope Harmon, and Pam Johnston, each with 4 wins. Pam Johnston, going undefeated to the finals dominated the ladder. In order the following were defeated: Charlie Greer, Hope Harmon, Don Lancto, and finally Joe Zilligen. But Zilligen defeated Lancto in the loser ladder and came back to challenge Pam Johnston in the finals. But Pam was not to be denied, taking the game 10 to 9 in a well-played final.

Dorthy Fosse, the Invitational namesake, at 91 years young, with a 9 handicap competed in the entire tournament, finally losing out late Saturday afternoon

Third Flight had Antonia Marmo as the undefeated block leader. Tom Shelko took 2nd in the block. The ladder was all Tom Shelko, with Bo Bohannon, seeded third, working his way through the loser ladder to end up challenging Shelko in the finals. Tom and Bo progressed through the match trading the lead several times. Tom Shelko emerged victorious 17 to 16 when the final clock went off.

Friday evening saw us in the main dining room of the club for an evening of cocktails and dinner, followed by a barbeque dinner at the Creek Club on Saturday evening.

Sunday, following the finals that were scheduled to wrap up at 1:00 PM (and did) a delightful buffet luncheon was served, with strawberry sundaes for desert, culminating with the awards ceremony.