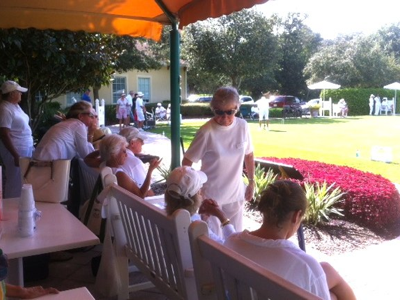 Everyone had a good time when Hammock Dunes & Grand Haven got together for a little friendly rivalry and pizza social.

Both clubs sent 12 members to the “Play Date”, pairing teams in high/low handicaps for the Round Robin play. One very familiar name on the Hammock Dunes list, Pat Williams, has dual membership and played on the Hammock Dunes roster.  Except for the last pairing, the combined handicaps range between 17 and 22, so they were pretty evenly balanced.

After game play, everyone adjourned to the Creekside Clubhouse for Pizza & Refreshments.

The Hammock Dunes Club asked us to save July 10, 2013 in an effort to continue our friendly cooperation.