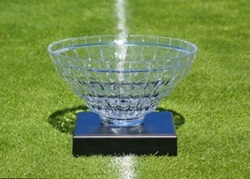 In a two day event on the lawns at Grand Haven in Palm Coast Florida, the Grand Haven Croquet Club’s top 8 available players competed for the Championship. The players, saddened by the sudden death of one of their fellow members and top competitors Bob Cargill, just a week earlier, all wore black ribbons in honor of his memory. Bob had been expected to play in the Club Championship.


While the weather was clear, high winds were a definite factor on both days and gusts to 35 and 40 mph were not uncommon. The situation found players often waiting for momentary lulls to make their shots and battling to keep their hats!

Cass was awarded the Championship Trophy at a cocktail reception by the pool at Creekside, immediately following the competition.