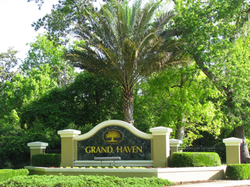 The second Grand Haven Invitational Tournament was again sponsored by Charles Schwab and ran from March 28 through March 31, 2007. A well attended welcoming cocktail party was held on Tuesday Evening, March 27 and a dinner on Thursday night. Our sponsor, Charles Schwab & Co. Inc., gave a BBQ party with open bar and live music on Friday night and a great awards luncheon on Saturday, as well as providing the custom made trophies crafted by Don Oakley of Oakley Woods.

The Florida weather was, for the most part, as good as it gets with mostly sunny warm days and gentle sea breezes. The only exception was Friday afternoon when a cold front with light rain passed through, giving some of us a good soaking. However, it had little effect on dampening any one’s enthusiasm for the event.

In first flight: Two Grand Haven players nailed the 1st and 2nd place trophies. Bob Cargill took the top trophy, loosing only one of the seven games he played. George Betz, last year’s champion, after loosing to Cass Gaisor and Sandy Rhodes in block play, came back in the finals to defeat both Cass and Sandy, moving on to challenge Bob Cargill. Bob was definitely “on his game”, and George appeared to be a little off, in a hard fought last game. Sandy Rhodes of Hammock Dunes played extremely well throughout the tournament, and edged out Cass Gaisor to claim third place.

For Grand Haven, the story of this Tournament was the strong performance put in by 6 of their players who were, not only playing in their first USCA sanctioned tournament, but had learned to play Croquet less than a year ago.

In second flight: Chick Carpino, who started playing only last summer, was undefeated going into the finals. However, ultimately, experience seemed to be the key, as John Herrin of Cypress Village ended up with top honors. His very steady, well played game, quiet methodical style and accuracy allowed him to prevail over Grand Haven's Chick Carpino in the finals. Chick’s second place win was followed by Gene Baldrate of Grand Haven, who came in third, beating Vincent Marmo, another of last years crop of new players.

In third flight: New player Don Gregg of Grand Haven surprised everyone by breezing through his opposition to win the third flight, first place trophy and was the only undefeated player in the tournament, having won all seven of his games. Don, a 14 handicap when he entered the tournament, emerges as a 12. Rich Burns who has also been playing less than a year nailed second place despite his loss to his wife, Carol. Deb Buress of Hammock Dunes, a strong and often flamboyant player, edged out Carol Burns to claim 3rd place.

I might also add that, throughout the Tournament, we had an unusually large number of spectators.  We also had a marvelous crew of well trained Board Keepers and a great Tournament Committee.