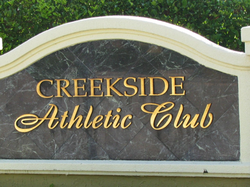 The great April weather Florida is famous for certainly blessed all four days of “The Grand Haven Invitational Tournament 2008”. This is the third year for this tournament which has, from the beginning, been sponsored by Charles Schwab & Co. Inc. This sponsorship has allowed Grand Haven to offer a lot of extras to its players from gala social events with complimentary drinks and custom-made trophies to special gifts for the players such as this year’s white rain jackets with tournament logos. Needless to say, all 24 player slots filled quickly.

Grand Haven’s Thomas “Chick" Carpino dominated First Flight with a strong performance that, ultimately, prevailed over runner-up George Betz, the winner of the Grand Haven Invitational 2006.  Both players were extremely aggressive in the final match with Carpino making a good break early in the game, to move ahead.  However, Carpino got in trouble when he became five ball dead and Betz capitalized on the situation but refused to take his balls through one-back. Eventually, Carpino forced the issue and was able to clear. Then, with some excellent shot making, Carpino caught up to Betz. The two players traded wickets until the last moments of the game when Betz missed a critical short shot, giving the game and the Championship to Carpino.

Also strong in First Flight was Rich Burns who was 5 and 1 going into the finals. Burns, a 10 handicap, was the highest handicap player in First Flight, but his fine shot making, steady game and good strategy allowed him to overcome his fourth place opponent Sandy Rhodes (7 handicap)  from Hammock Dunes, and take third place. Burns also won a double digit handicap reduction.

In Second Flight, British player Mark Houslop also from Hammock Dunes was a stand-out, winning all but one of his games to take first place. The finals saw Grand Haven’s Carol Burns, who had also won all but one of her games give a strong performance in a tight battle with Houslop. Her conservative but steady play kept pace with Houslop until the very end of the match when Houslop prevailed by one wicket.  Third place went to John Herrin from Cypress Village who was last year’s first place winner in Second Flight.  Vincent Marmo from Grand Haven finished fourth.

Third Flight provided one of the more colorful games when last year’s Third Flight winner from Grand Haven, Don Gregg played newcomer to the tournament, Don White from Grand Haven. This was White’s first Sanctioned Tournament and he had worked hard to get his handicap down, so as to qualify for the event. The two “Dons” couldn’t have been more un-alike in their playing styles. White, with his rapid shooting and very aggressive style finally prevailed over the more laid-back and deliberate playing of Gregg in the finals, thus earning the right to play against Dorothy Williams from Hammock Dunes, who was undefeated in block play.  In what might be considered an upset, Don White took First Place in Third Flight, thus relegating Dorothy Williams to Second Place and Don Gregg to Third Place. Betty Simmon from Cypress Village finished in fourth place.

By all accounts, the Third Grand Haven Invitational Tournament was the best yet. The weather was perfect and the spectator-crowd the biggest ever, on all four days. The courts were in great shape.  Fred Jones, as always, did a fine job as Tournament Director and the generosity of our sponsor, Charles Schwab & Co. Inc. was outstanding!