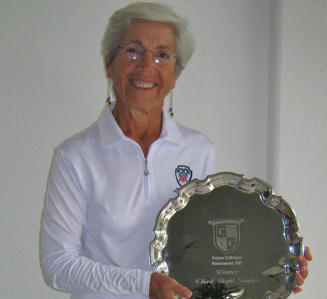 Antonia Marmo took home the trophy for 1st Place in Third Flight Singles at the 25th Annual Peyton Ballenger 2013 Invitational that was held February 4-9, at The Croquet Club at PGA National, in Palm Beach Gardens, FL.   Representing the Grand Haven Croquet Club were Antonia and Vincent Marmo.
Peyton’s untimely death in 1992 at the age of 42 shocked her many friends in the croquet world.   She served as Director of Croquet at Pinehurst, and after a brief stint as Assistant Pro at the Meadowood Resort, became the Director of Croquet at PGA National in 1988.  She was a member of the United States National Croquet Team from 1988 - 1990 and was voted “Most Valuable Player” in the 1990 US International Challenge Cup.  She was the only woman to represent the US in the World Croquet Championship.
Time to party ... Hawaiian style!