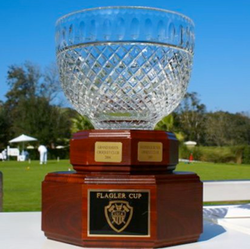 The third Flagler Cup tournament was held at Grand Haven Croquet’s Creekside courts on December 7th and 8th, 2007. This is a contest in which two neighboring croquet clubs, Hammock Dunes and Grand Haven, each bring out their 10 best players in a head to head singles event. This year’s contest gave possession of the Flagler Cup and bragging rights back to Grand Haven, who also won the first year but lost to Hammock Dunes in the second encounter.

Hammock Dunes Champion Ted Knopf went undefeated in First Flight but Grand Haven’s strong Second Flight carried the day.  Both teams met for drinks and fellowship at Grand Haven’s River club after the games. The fourth Flagler Cup is scheduled to be held in 2008.