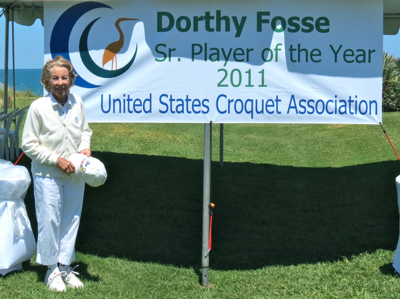 The Grand Haven Croquet Club was well represented in the first and second flights at this USCA sanctioned event with 9 players.

The Invitational was held at the ocean front community of Hammock Dunes, a spectacular venue, that was hosted by the USCA 2011 Club of Year.

Meet the Grand Haven Tournament Players...
Although Grand Haven had no players in the Championship or Third Flights, it was well represented in the First & Second Flights.  Five of the nine players made it to the semifinals and came home with trophies.
First Flight players from GHCC:
Pat Williams, Joe Zilligen,  Jim and Mijai Pagano, and Vincent Marmo


Off to the courts for block play...
For First & Second Flights, play began with a block of six games, followed by a double elimination ladder on Saturday.
Sunday Final Standings 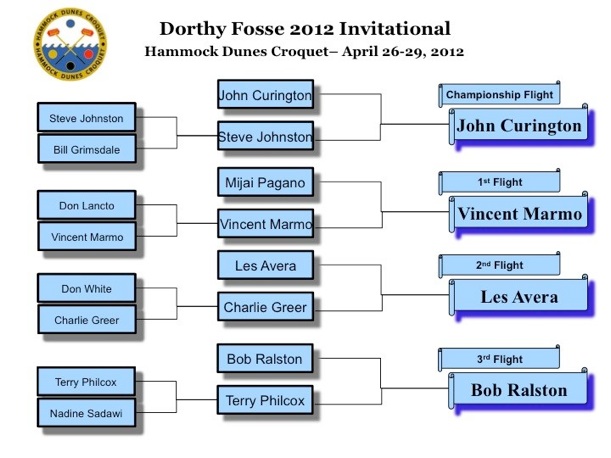 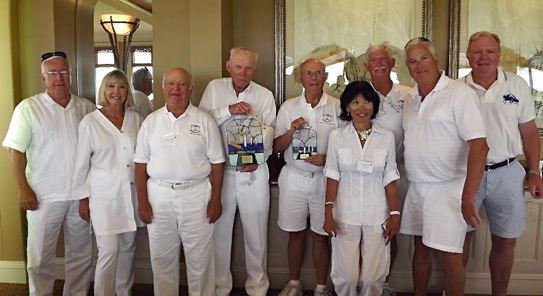 All the Grand Haven Tournament Players together at last
. 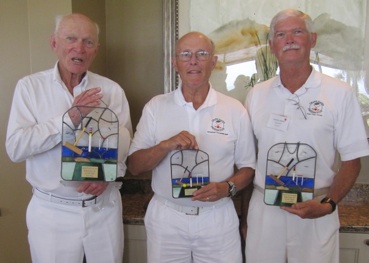 First Flight Winners
Vincent is the first person from GHCC to get his name engraved on a Hammock Dunes Trophy! 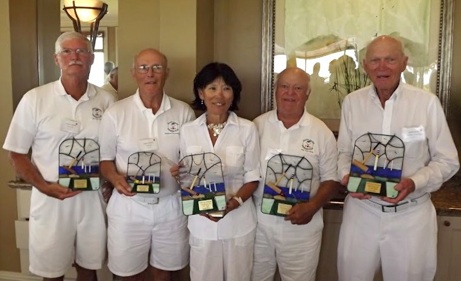 The setting was outstanding, the weather was fine, the players were gracious, the food was superb, and the Twelfth Annual Dorthy Fosse Invitational played April 28th to May 1st at Hammock Dunes, Palm Coast, Florida was a huge success.

The grass on both courts was perfectly green and smooth, and the competition was keen. The courts are situated just outside the clubhouse, between the club and the Atlantic Ocean; a nice, but sometimes strong, ocean breeze kept everyone cool.

The two additional courts that were used became available through the generosity of the golf course superintendent utilizing an unused practice tee area on the driving range at the Creek Course. The generosity and co-operation of the golf course personnel was deeply appreciated. This is the fifth year that these lawns have been available. The golf personnel maintain them to croquet quality. First, second, and third flights each spent one day on the Creek courts, and the remainder of the time at the Dunes courts.

With players from North and South Carolina, Georgia, and Florida, the total of thirty-one made for near- perfect flights of eight players each.

Following a superb Wednesday evening opening party at the Main Club, consisting of cocktails and heavy hors d’oeuvres, play began Thursday morning in earnest. Unique at this club, at least in my experience, was the assignment of deadness board keepers, for each board for every game during the tournament. All were club members and croquet players, not playing in the tournament. What a wonderful way to learn the game. Also the committee serving ice-cold bottled water both to the players and the board keepers throughout the tournament was a unique experience. Everyone involved appreciated both.

Championship flight played on the south full size court. The flight was led by Steve Johnston with a handicap of –0.5, and topped by Bill Hartman with a handicap of 3.5. Ted Knopf was out this year with back problems, but did manage to keep most of the deadness boards for the flight. Block play was the order of the day Thursday and Friday with a double elimination ladder on Saturday and Sunday for all flights.

John Curington was first out of the block last year, this year saw him thankful that everyone moved from the block to the ladder, as with only one win in the block he ended up being seeded seventh of seven. Steve Johnston was the strong block player losing only to Jim Hall, with the Huxtables, Ron and Linda close behind. The double elimination ladder was another story. John took out his half of the ladder to meet and lose to Steve Johnston in the quarterfinal. Into the loser bracket, he took out Bill Grimsdale 15-4 to return to play Johnston in the final. In what turned out to be not much of a contest, Curington took Johnston 21-7 to capture the title for the second year in a row. Grimsdale was third

The Pagano’s of Grand Haven led first flight block play. Jim ending up 1st with Mijai close behind; Vincent Marmo and Pam Johnston also matched their four wins each. In the ladder Mijai was the one to beat, but she went straight to the finals with no losses. Vincent Marmo took a different route. After one win and one loss in the ladder, he wandered his way up through the loser’s side three games later; he was still playing and ready to take on Mijai in the final. Many of Vincent’s games were one point wins, and true to form so was his last one, winning over Mijai 12 to 11. Don Lancto was third

Second flight saw Les Avera of Grand Haven and Lake Toxaway lead the block and the double elimination ladder without a loss. A perfect record of six wins in the block naturally seeded him #1 in the ladder. Charlie Greer with five wins in the block, his only loss being to Les, played a very respectful ladder, defeating Don White in the semi-final 26 to 9, to face Les in the final. In what appeared to be a closely matched pair, the lead turned back and forth several times, before the final turn decided that Les would take the trophy 15 to 14.  Don White was third.

Dorthy Fosse, the Invitational namesake, at 92 years young, with a 9 handicap competed in the entire tournament, finally losing out late Saturday afternoon

Third flight, showing how practice can improve a person’s game, saw Bob Ralston of Hammock Dunes set a similar example as Les Avera. Bob also went undefeated through the block, as well as the ladder, to take the winner’s trophy. Nadine Sidawi, the current president of the Hammock Dunes club was second in the block with five wins, her only loss being to Bob, make a good showing in the ladder, losing to Bob in the quarter finals, then losing to Terry Philcox, who in turn lost to Bob Ralston 22-12

Friday evening saw us in the main dining room of the club for an evening of cocktails and dinner, steak filets or salmon, your choice, followed by a barbeque dinner at the Creek Club on Saturday evening.

Sunday, following the finals that were scheduled to wrap up at 1:00 PM (and did) a delightful buffet luncheon was served, with strawberry sundaes for desert, culminating with the awards ceremony. Trophies this year, were stained glass keepsakes, imaging the croquet court and the nearby ocean complete with mallets and balls, hand made by Ted Knopf and awarded to the top three finishers in each flight

Plans are in the works for next years Invitational, scheduled for the last week in April 2013