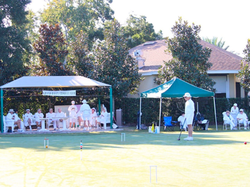 Welcome to the 5th Annual Grand Haven 2010 Invitational. The welcome mat was out, and the players were treated royally, as has been the custom during the previous years. A cool front (We don’t have cold fronts in Florida) went through the day before, and left us with a clear sky and warm sunny days. The croquet committee, under the direction of the Tournament Manager, Jim Pagano came up with a pleasant mix of croquet and social events to keep the most discriminating player pleased. Special recognition went to Yvonne Croizer for her untiring devotion to duty. Fred Jones controlled the on court activities.

Using an oversize court, divided into two, three flights competed for three full days, and Saturday morning to complete a round robin in each flight. Court limitations allowed only two games a day for each player, but with the handicap range from 4.5 to 13, the players were satisfied. The majority of the players were repeats from previous years, and the mix of locals and guests worked well. 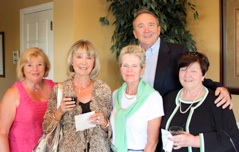 The opening party was held at the home of Pat Williams, where schedules and favors were handed out, and the liquid and solid refreshments never seemed to end. All had a great evening.

The traditional dinner party was held at the Golf Club on Friday evening, again the food, drinks, and comradely were first class. This was preceded Thursday evening night by a buffet dinner at the clubhouse courtside conceived and served by Yvonne and Jean Paul Croizer. What a wonderful meal and a pleasant evening.
When it became time to play croquet, the courts were lively, but without incident. The games went smoothly, and on time, with board keepers supplied by the club, both by the players and by non-participating members

Saturday morning was the wrap-up with the top three players from each flight playing in a single elimination ladder, designed to finish by 1:00 PM so the group might move indoors for a nice lunch and the award ceremonies

Second flight was decided when Vincent Marmo, who went undefeated throughout the entire tournament, including the ladder topped Charlie Greer in the final. Don Gregg was third.

Third flight looked to be a win for Betty Simmon due to her showing in the block play, but it was not to happen, as Alan Keith came along to take the prize by one point 18-17. 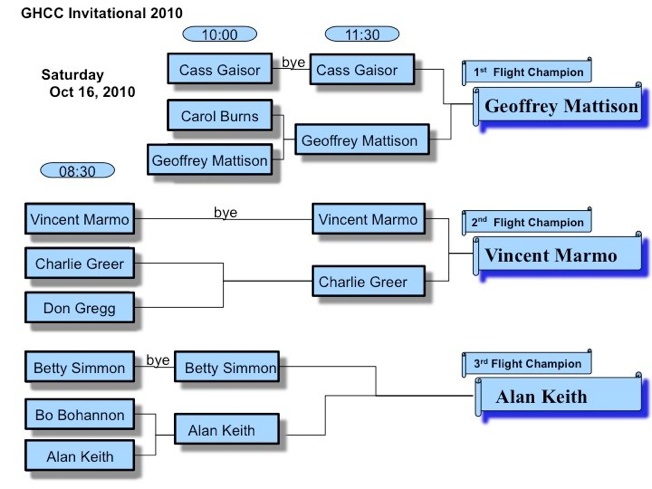