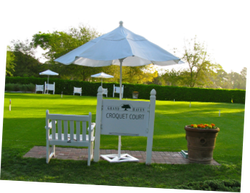 Croquet at Grand Haven was the vision of Kevin Roberts, the Grand Haven project manager for Lowe Destination Development (the original developer of Grand Haven) in 1998, at the suggestion by his cousins Pat and Chuck Williams who were croquet players at Hammock Dunes.  Pat Williams and the legendary Dorthy Fosse of Hammock Dunes, were the first instructors to teach the game to those who were interested here at Grand Haven.  The small court at the Village Center currently used as a training/practice court was the result of Kevin Robert’s dream.

Among those Grand Haven residents who took the first lessons from Pat and Dorthy were Ed and Jane Reichel, Jim Harter, Ed and Barbara Holtz and Dorothy Crawford and her late husband.  This group would eventually organize and become the Grand Haven Croquet Club (GHCC).  Pat Williams and her husband, Rear Admiral Charles Williams, would become residents of Grand Haven a year or so later, followed by Cassandra and Charlie Gaisor, also from the Hammock Dunes Croquet group. At that time, the GHCC was a loosely structured group of about 15 residents, and today it is a well-developed Club with almost 100 members...and growing!  The primary games played by the Club are American Six Wicket Croquet and Golf Croquet.

In 2021, two new full-sized croquet courts were added to the Creekside Amenities Center, along with our original full-sized court that was installed in 2005.  These additions offered the room to grow and that growth has been explosive with many beginners’ classes being offered each year.

All members of the GHCC are also members of the United States Croquet Association (USCA) which is headquartered in West Palm Beach, FL.  Many of our members play major tournaments several times a year around the country, including match play and “friendly play” within the Club. We recently joined the locally formed First Coast Croquet League that plays both competitive and social Golf Croquet games among seven other croquet clubs from Florida to Georgia.  The GHCC also hosts a number of member social events, both on and off the courts, during the year.