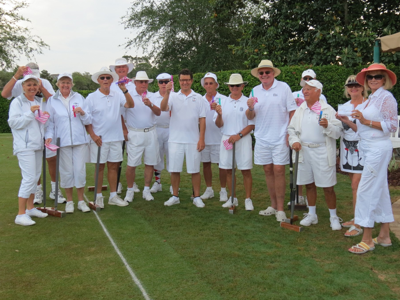 After waiting a year, it was time for the REMATCH between the women and men of the Grand Haven Croquet Club.  Recalling last year's event, a protest was filed against the men for their failure to follow the rules.  This year, the women arrived early, were out in force, and were ready to take on the men.  There were so many women that signed up that the matches were lopsided and the Event Director had to recruit two women to play on the men’s team.  He selected two ladies that were married to two men players to reduce the “cat scratching” that occurred during the men’s victory last year.

Hosted by the "Female Players", the male line up was served  by hostesses a “special refreshment” in test tube vials and was served with Pink & White Zebra napkins.

At the conclusion of George’s “Talk”, Nancy gave a little speech...

”From the beginning of time, men and women have been in competitive situations. And, historically, women have used their feminine talents to "seduce" ---no, no "induce" our male friends to enjoy the simple pleasures of life.  I ask you, is batting a  ball through wire hoops a "simple pleasure"?  Please focus your attention on the ladies of the morning as they perform a mini-tease.”

Before the games got started, a little “entertainment” was provided by the women to distract the men at the start of the game.  For full effect,
click on the arrow above.
Before you click here to see Jim's video, pause the background music above.