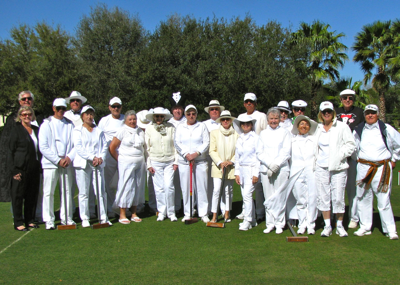 Grand Haven Croquet Club Members gathered in the morning shadows on the courts in their whites and formal wear to celebrate the beginning of February. February came from the Roman Festival of purification. It also is the only month adding a day every four years, called Leap Year.   Chips were used to match up the players.

Many dressed in in their formal attire with anticipation of winning the big prize. 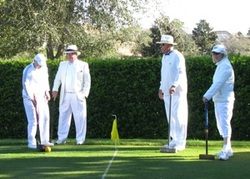 Time for the chip toss to match up the players.  Off they went, all 22 of them to their respective places on the courts to play a 40 minute game.  Games were a little different today, each started using the Golf Croquet start method.  Low handicappers helped the high handicappers to learn the game and strategy.  No records of wins or loses were kept, just a day of fun.
Keep looking for future event like "The Battle of the Sexes", “March Madness", "Changes of Attitude" all events where you can express yourself, and play without pressure.